After the successful completion of the hi Hotel project in the Montecasino district, moduBiLD sat down with the project team to discuss the highlights and challenges of this ground-breaking project.

Kevin van Aardt of L&S Consulting, chief engineer on the project, took the time to answer our questions regarding some of the more interesting engineering aspects of the hi Hotel and modular building.

In both the design and implementation stages, how did the Hi Hotel project differ from traditional or conventional building, specifically from an engineering perspective?

[KVA] The lightweight design required a lot of attention and focus on coordination between disciplines very early on in the design to ensure all components and systems would function to specification and expectations. Components, such as connections, required detailed consideration with many iterations and versions to optimise for production and later assembly on site.

The components were built ‘virtually’ many times over to iron out potential snags ahead of time so that the roll out could be as smooth as possible first-time round.

Conventional build methodologies have become entrenched, with little scope for innovation, whereas the possibilities light weight construction offers in certain situations is refreshing from an engineering and team collaboration point of view.

For the structure and the final product, how would you summarize the modular build result?

[KVA] The resulting product has exceeded expectations which is something the whole team can be proud of, specifically as the location and level of quality required for the first hotel created high expectations to start with.

From an engineer perspective, what is in your opinion the top 3 advantages of the light steel modular system? (apart from speed, weight and accuracy)

2 – Ability to prototype and adapt during manufacture

3 – Scalability and opportunity to phase structures to allow early occupation of portions of the building before overall completion.

In your opinion, considering the weight, sound rating (R61dB) and services access in floors, are the light steel floor systems suitable and competitive to concrete or heavy steel systems?

[KVA] Yes, where this is used in modular form with limited spans (to ensure suitable deflection and dynamic performance).

Are there any points for improvement or negative aspects of the light steel structural system you would want to see improve?

[KVA] Due to the extreme hard grades of steel available for light weight members in South Africa, punching, drilling and crimping of connectors can be a challenge. So it would be great if more reasonable grades were available, so that tooling requirements could be more conventional.

Would you recommend this as a structural system compared to traditional systems, and why?

[KVA] Yes, for specific types of buildings and locations. The system is perfectly suited to modular type arrangements with limited spans that can be in a simply supported configuration (to control lateral noise and vibration transmissions). Ie Hotels, residential blocks, clinics, schools etc.

What other aspects of the structure would you like to hi lite or mention?

[KVA] With clever application of architectural finishes, good engineering and build, light weight structures can be completely indistinguishable from conventional structures except for a higher final quality in most cases! 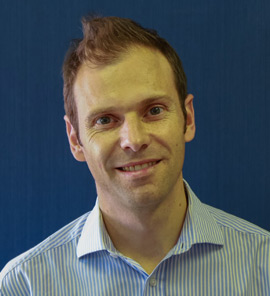 PrEng, BSc (Eng), MEng, PDM
Kevin van Aardt graduated from the University of the Witwatersrand in 2001 with a BSc in Civil Engineering. After graduating he started his career with Murray and Roberts Civils, with whom he had a study bursary. He worked on various highway and road rehabilitation projects (such as the N3 and N4) as a site and costing Engineer. In 2004 he joined Liebenberg & Stander, renamed L&S Consulting in December 2005. Kevin graduated with a MEng in Structural Engineering in 2005 from the University of the Witwatersrand, and completed a Post Graduate Diploma in Management (PDM) at the Wits Business School in 2006. In 2009 he was appointed as an Associate of L&S Consulting and in 2015 he became a Director. His field of expertise lies in the structural design of concrete, steel, masonry and timber as well as investigational reporting.